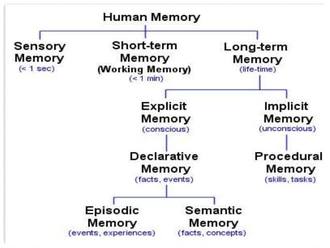 Memory is the process used to receive information, encode it in order to make it meaningful and retrieve that particular information when necessary. The information, after stored, is called memory. Memory is our primary source of knowledge when asked questions, and only if memory fails do we go to alternatives such as encyclopaedias, the Internet, etc. However, memory is not our primary source of acquiring knowledge, since we use other ways of known such as logic or reason and then lastly, we modify what we have found out using our memory. It can however, be argued that memory has an influence on everything we learn as we tend to judge it by using our past experiences.
Memory can be divided into two kinds of memory and then further divided into two. Explicit memory is declarative memory; it is memory that you actively recall and can explain. There are two types of explicit memory, semantic and episodic. Semantic memory is general knowledge: facts, concepts and names. This, for example can be the name of the prime minister or the year your favourite band was formed. Episodic memory is long-term memory of personal experiences, such as a concert that you went to or your high school graduation. Implicit memories are memories that are not consciously or intentionally formed and are therefore also known as non-declarative memories. There are two types of non-declarative memory, procedural and emotional. Procedural memory is learning how to do things such as riding a bike or opening a book; we don’t necessarily think about what we are doing. Emotional memory is the memory that we know the least about – it is not a specific type of memory but rather the impact of emotion on our memory. It has been found out that memories that have traces of emotion are more vividly remembered, even when the part of our brain that has part in creating these memories, the hippocampus, is damaged.

Memory as a way of knowing is not our primary source of acquiring knowledge and neither is it disreputably reliable. This is seen through cases built up on eyewitness testimony, which can be found in the real-life example section of memory. The importance of memory as a way of knowing is especially highlighted when we lose our memories as we cannot function well in our daily lives without our memory.