Scientific knowledge is supposed to be absolute, but becomes tentative when the objects do not fit into the categorization of the scientific method.


For the scope we must question what sorts of things can and cannot be considered to be the purview of the natural sciences. Science can be used where the scientific method can be applied. These would be rocket experiments, DNA-tests and so on... In physics, an experiment that can be used to test the laws of nature such as Newton’s Laws of motion. For example, if a force is exerted onto a body on a surface, friction would try and stop that force. This is a clear fact. On the other hand, the scientific methods are less applicable in disciplines such as psychology, religion or understanding feelings. It cannot be applied for religion because there is no way for the scientific method to prove or disprove the existence of God. We also have no reliable evidence that hasn’t had modifications. There is no such apparatus that can detect if God is present or not.


In science you have to ask what evidence can be gathered to support a given hypothesis. It is required that all the available data is fitting for the hypothesis. This also means that all considerations must be taken into account, including observations which do not fit the hypothesis.


Language plays a passive role in the sciences. Scientists use language to convey the information from one speaker to another. When describing natural sciences it is important to use concepts. These concepts help create a common parameter for scientists and students. In natural science concepts and scientific language play a significant role in creating a common ground for investigating the area of knowledge. However a problem with the many different concepts are that people with no knowledge in the specific field have no chance of understanding it. Science has become so specific that scientist focus on one narrow areas, for example how braided nylon tube can be a replacement for aortic material. The most common concepts in TOK are; the scientific method, falsifiability and replication. Other terms that are important in the natural sciences are; hypothesis, experiment, variable and theory. However the definition of theory does not mean, guess. A scientific theory describes a validated idea.


When writing a scientific journal/article there are three things to keep in mind:
Use third person.
Use past tense.
Be precise – use scientific words.
http://www.engageinresearch.ac.uk/section_5/using_scientific_language.shtml

Method: Noun. A procedure, technique, or way of doing something, especially in accordance with a definite plan.
http://dictionary.reference.com/browse/method


Replication: Noun. The act or process of replicating, especially for experimental purposes.
http://dictionary.reference.com/browse/Replication?s=t

Hypothesis: Noun. A proposition, or set of propositions, set forth as an explanation for the occurrence of some specified group of phenomena, either asserted merely as a provisional conclusion to guide investigation (working hypothesis) or accepted as highly probable in the light of established facts.
http://dictionary.reference.com/browse/Hypothesis?s=t

Experiment: Noun. A test, trial or tentative procedure; an act or operation for the purpose of discovering something unknown or of testing a principle, supposition, etc.
http://dictionary.reference.com/browse/experiment?s=t

Variable: Noun. Something that may or does vary or change; a variable feature or factor.
http://dictionary.reference.com/browse/variable?s=t

Theory: Noun. A scientific theory is an idea which has been validated over and over again - which scientist have attempted to falsify many times over a long period of time, without result.
http://dictionary.reference.com/browse/theory?s=t

Falsifiability: Verb. Able to be proven false, and therefore testable; as, most religious beliefs are not falsifiable, and are therefor outside the scope of experimental science.
http://www.thefreedictionary.com/falsifiable


A video to help explain falsifiability and show examples to how it work
www.youtube.com%2Fwatch%3Fv%3DzPR_5TOsh-Y&h=VAQH54_7N


When studying the natural sciences, there are different ways of approaching it. Scientific methods such as observation, reason, and experiment are often used in order to ‘scientifically prove’ a particular hypothesis.In order for these findings to be reliable knowledge, one needs to be able to generalize and replicate the scientific method independently by other researchers. The systematic checking and evaluation of evidence is also an important feature when discussing the validity of an experiment.

There are different stages of the scientific method. The basic features that you need is: 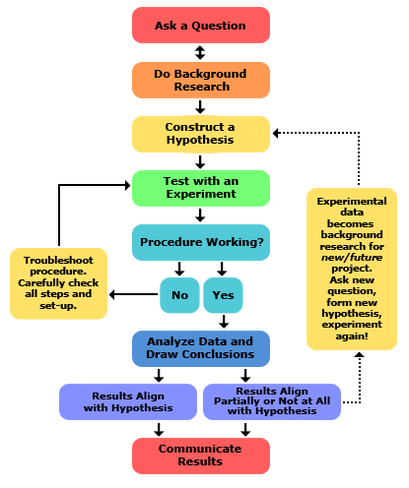 This following article talks about the difficulties of applying fundamental theories to the observed Universe. Karl Popper argued: a theory must be falsifiable to be scientific. This is not possible with hypothesis about quantum physics only for hypothesis that relate directly to the real world and that are testable through observations. Furthermore, the article discusses string theory, many universes, and to what degree the theories ‘pass the test’.

“Science is built with facts just as a house is built with bricks, but a collection of facts cannot be called science any more than a pile of bricks can be called a house” – Henri Poincaré.

As mentioned, if something is ‘scientifically proven’ most people assume that it equals the truth. But what happens when it becomes impossible to use scientific methods as a way of knowing? Can we still argue that something is valid, even though it cannot be proven through experiments? For example, we cannot measure the existence of God nevertheless we are not able to falsify the claim that there is a God. This is one of the limitations of scientific methodology. Another limitation of the scientific approach is that it even though we can measure a difference under certain conditions, scientific methods cannot explain why there is a change. It can be measured that a person loose approximately 14 grams when they die, but it is not possible to say why. Some say it is the soul of the person that leaves the body. While others claim that it is due to the oxygen leaving your body when you die. Thus natural science becomes more an act of observation, rather than a tool for explanation.