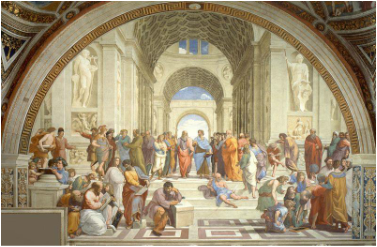 It is uncertain when the human mind first decided to contemplate the significance of Morals and Ethics, and the questions that surround them.

However, it is evident that this particular branch of knowledge has helped to shape and define us, and the very fundaments of the society we live in. Many of the positions on ethics we have currently were based on western philosophy, with Plato and Aristotle playing a crucial role in its development in 4th-5th century BCE, Immanuel Kant and Jeremy Bentham in the 18th and early 19th centuries, and Ayn Rand, James Rachels, Phillipa Foot and Daniel Dennett in the late 20th and 21st centuries. While ethical theories previously established such as utilitarianism, ethical egoism and virtue ethics are still relevant today, the concepts on which they are built on have evolved over the course of years.

An example of this would be the attitude towards Emotion as a way of knowing in Ethics today. In the past, we had a model where emotion had to be controlled by reason; by the late eighteenth century, David Hume had proposed that it is reason that must be tempered by emotion.

Many argue over the relevance of a “Moral duty”. Utilitarianism, which is founded on the importance of our desires, makes no mention of a moral duty or a behavior, but instinctively looks upon the one who tries to commit great evil, but fails, with great disdain. This leads us to consider that the outcome alone is not sufficient to judge the rightness of an action, as intention plays a role as well. Other questions arise as a result of this line of questioning, such as are these moral duties universal and unchanging?

The categorical imperative, described by Kant in Deontology suggests that actions carried out can be deemed immoral/moral by the consequences of the actions, and if a consistent world is maintained. Alternatively, it can be argued that placing too much of an emphasis on reason and subordinating everything to rational consistency, as Kant did, is rather extreme. Given that we are often face with complex, multi-faceted issues, reducing morals to simple deductive arguments may not be helpful at all.

Aristotle wrote of Phronesis, or practical wisdom that would enable us to exercise moral intelligence at an intuitive level quickly. This is related to the concept of intuition. The notion that character, as opposed to outcome or duty, can matter seems to be reflected in the idea of intention as an important factor in moral decisions, and this virtue ethics is an old one. Virtue ethics can be defined as a set of philosophies that hold that the moral life should be concerned with cultivating a virtuous character, instead of following rules of action. By this framework, a decision can be moral even if the outcome is bad.

Ethics usually appear as shared norms and values within a specific group of people (Religious, geographical, etc.). Here, ethics is a form of shared knowledge functioning as a set of rules on how to behave within the group. The most significant comes in the form of written laws whereas some exist only by mutual understanding. However, ethics differ from individual to individual and can therefore not be defined as a general set of rules. Some ethics are inherited through ones family, some are adapted through the society and some are developed within the individual itself. The question arising from this individual differentiation is therefore: How do we determine which ethics that are correct/valid? Within countries there are judges and policemen who are supposed to be ethical superior, but how has it been decided that these sets of ethics are more correct than others? These individuals also have different sets of ethics developed within them and therefore have their own perception of what is morally right. It is therefore natural to question the authority of these figures, since they have no evidence that their personal ethics are more valid than others.

An example of a judge who was ethically incorrect and directly immoral is Elizabeth E. Coker. http://www.houstonchronicle.com/news/houston-texas/houston/article/Judge-in-texting-scandal-files-for-Polk-County-DA-5049707.php. This article describes how Mrs. Coker, a state district judge in Texas, sent text messages to prosecutors advising them on how to approach the witnesses. Moreover, she repeatedly spoke to the jury outside court in order to direct them in a certain direction. This clearly shows how individuals who are supposed to be ethically superior have their own ethical standpoint that doesn’t necessarily correspond to the written laws.

If people should always do what feels ethically correct to them, some individual’s action and decisions can result in bad outcomes. This way of reasoning is called virtue ethics. Here, the individual make moral judgments based on what feels right inside them rather than the guidelines/laws provided by society. These individuals act based on what to them will lead to the highest eudaimonia, which is a contended state of the most possible happiness in a given situation. If these people committed a crime, could they be righteously punished even though they acted based on what they felt was morally correct?